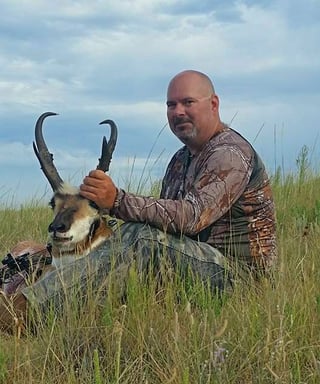 Originally from Poplar Bluff, MO, Eric has spent the majority of his life working in insurance. His journey first began when he landed a job at his dad's agency in 1992. Several years later, after learning the ropes and getting a feel for how the industry worked, Eric bought his dad's agency, carrying on his legacy.

After years spent running the family business, Eric sold it in 2007 to First Community Bank, but continued to manage the company, until the bank sold it this past year.

When that deal was settled, Eric made the bold decision to step outside of his norm, leaving Poplar Bluff to start a new business - one he could call his own - Wilcoxon Insurance Agency. "I decided to get back to my roots and open a small agency in the tight-knit community of Van Buren, right on the banks of the beautiful Current River." Because Eric's two favorite therapeutic hobbies are hunting and fishing, living and working on the river just seemed like the perfect fit.

Eric and his family - wife, Christy, son, Riley, and daughter, Shelby - have embraced the move to Van Buren, for more than just the scenic, river-front backdrop. Community involvement is important to the Wilcoxon family and Van Buren offers plenty of community events for them to dive into, whether it’s volunteering for local fundraisers or cheering on the Bulldogs.

When asked what he enjoys most about being an insurance agent, representing small towns like Van Buren and the surrounding area, Eric said it's all about looking out for good people who put their trust in him. "I've always said that as insurance agents, we are here to protect people and their largest, most valuable life investments. And that requires the utmost attention to detail. My favorite thing to do as an agent is to find and fill holes or gaps in a policy that could make a huge impact on the insured."

Throughout his career, Eric said he's learned first-hand how daunting of a task it is for people to find the best insurance. But from day one, his main goal has always been to calm those fears and make it easy for people to "win." The first step? Getting a quote. "The downside of getting a quote on your insurance? There is no downside. The worst that could happen is you find out you are in fine shape or you discover you could be getting more bang for your buck with a new policy and agent. Either way, you win. And everyone likes to win."

With high hopes for the future of his young agency, Eric made sure he had a winning team behind him to help it thrive for years to come. "Pam Lindsay started working with my father in 1985 and has been with me from the beginning of my carrier. She has acquired a great knowledge of the business and is good at keeping me in check. Kerri Cleaver is the newest member of the agency and has already shown she was a great hire. Being from Van Buren, she has brought a nice local flavor and a familiar face to the agency."

Reflecting on the events that have led him to this point in his career, Eric has no regrets. "There's no looking back. I'm more than ready for what the future has in store."